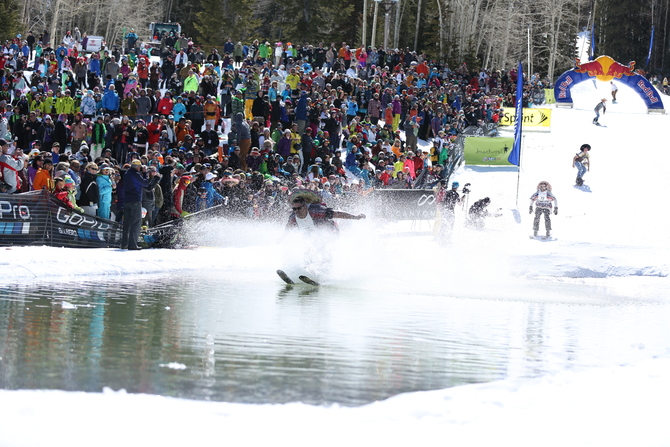 This picture pretty much sums up April in Park City. (Photo by PC Resort Lodging)

We never quite know what to expect from April here in Utah. We could be inundated with spring showers (in rain and snow form) or the skies could be clear and sunny. Rain, snow, or shine, there’s plenty of April events in Park City to keep us all entertained. From end-of-ski-season festivities, to Easter egg hunts, to an Earth Day Dinner for a good cause, here are my picks for what to do this month.

The Creators of Serial Come to Park City Live – April 1

The award-winning pioneers of the podcast Serial from NPR are coming to Park City! Sarah Koenig and Julie Snyder will offer an inside peak into the making of this viral radio show. They’ll also give an update on the much awaited Season Two, which is currently underway. The event takes place at the George & Dolores Eccles Center Theater at 7:30pm.

This three-day retreat celebrates high performance thinking and culture in Park City. The festival kicks off at the Dejoria Center on Wednesday night and concludes with a Magic! pop/reggae concert on Main Street. Over 40 speakers will stimulate outside-the-box thinking. In addition to speakers, there are also an array of one-off experiences, such as a session on the history of Deer Valley. Get tickets and the full schedule online.

Every year, Park City residents gather to watch brave locals attempt to traverse a 100-foot pond on skis or snowboard. This year, the spectacle takes place on April 8. If you want to compete, remember to wear a funky costume. And if you’re just coming for the jaw-drops and laughs, be sure to stay for a free concert at Canyons Village afterward. The Pond Skimming Contest is part of Park City Mountain’s larger Spring Gruv celebration, which runs April 1 until closing day (April 16). It’s basically like a giant festival every single day during April skiing with afternoon concerts, base area activities, and vendors.

Need to get the kids out of the house during spring break? Mindful Cuisine is hosting a fun pre-Easter workshop for kids ages 8-12 from 10-11am. On the menu: deviled eggs that look like hatching chicks, a mini edible vegetable garden, and an egg carton of homemade Peeps. Register by April 9.

During PC schools’ spring break, the Park City Library is hosting a FREE film series for kids! All films are free and will screen from 3-5pm. The series kicks off with Fantastic Beasts on April 10. Other films include E.T., Arrival, and the Eagle Huntress.

On closing day and Easter, Park City Mountain will hide 3,000 eggs around the mountain for kids and adults alike to find. Starting at 9am, Kids Easter Egg Hunts will begin at Canyons and Park City at Ski Beach and Resort Village. Eggs will be filled with candy and toys. Adults will be able to find eggs hidden all over the mountain. And at Deer Valley, the Easter Bunny will hang out around the base area to pose for photos with anyone feeling the Easter spirit.

We all love Recycle Utah for the amazing recycling services they provide us with here in Park City. Last year, they diverted 3,519,000 pounds of waste from the landfill. And while we lament the lack of curbside glass recycling in Summit County, we know we can always take it over to the CHaRM (Center for Hard-to-Recycle Materials) on Woodbine Way. On Earth Day from 6-9pm, Recycle Utah is hosting an Earth Day Dinner fundraiser at Wasatch Brew Pub. Come enjoy a tasty burger bar, great beer, live music, and a silent auction to support the organization’s mission.

The Comedy Central/HBO comedian is coming to Park City! Sinbad is known for crushing his stand-up routines, so no doubt he’ll more than amuse the local audience. He’s performing at the Dejoria Center in Kamas at 8pm, so you can pair the show with an early dinner beforehand at the State Road Tavern.