Ahhh. Spring Break in Park City. Will there be sun, or will there be snow? Unlike our ever-unpredictable weather, options for Spring Break getaways seem to dwindle the longer you have kids going through the system. What was exciting and new for the first born becomes “been there, done that” by the youngest.

To help alleviate Spring Break ennui, we’ve put together a few last-minute road trip ideas to help make this year’s Spring Break one for the books! 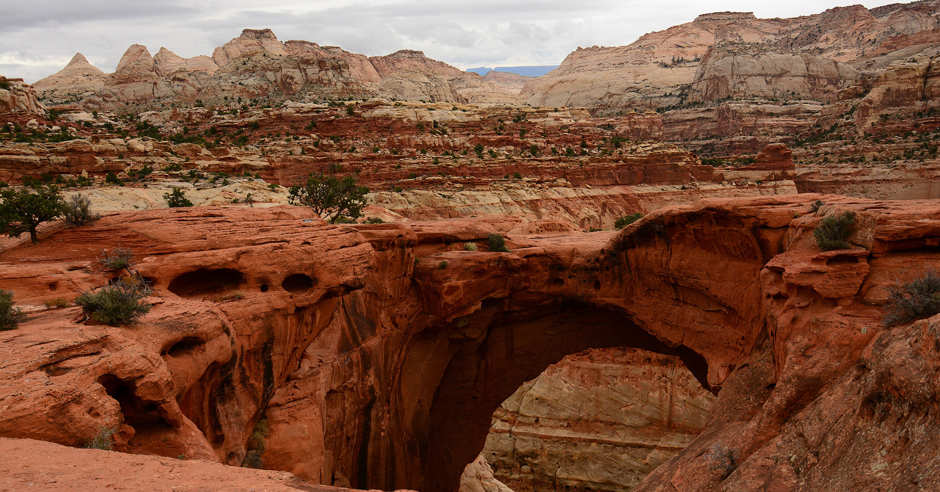 Deciding which of Utah’s five National Parks to tackle can be daunting, so why not do all of them in one week! Busy, yes, but imagine the reward of your kiddos going back to school after earning Junior Ranger pins from all five parks in one fell swoop!

This “5 Utah National Parks in 5 Days” article from Utah.com maps it all out for you. Starting with Zion on day one, and ending with Arches on day five, the simple bragging rights of saying you did all in one week should be incentive enough. And the benefit of having a Spring Break that lands after other Utah schools districts’ should mean the parks are slightly less crowded than usual.

For many Utahns, Vegas is merely a rest stop on the way to Southern Calif. And though Vegas went through a bit of a schizophrenic phrase (transitioning from a “family-friendly” message, to the iconic “What Happens in Vegas” campaign), you can always count on new attractions coming on line in Sin City.

Whether you’re passing through or staying for a few days, fans of Virtual Reality (VR) should head to The Void, located at the Grand Canal Shoppes at the Venetian Hotel. Opportunities to “step inside The Void” include “Ralph Breaks VR,” “Ghostbusters Dimension” and “Star Wars: Secrets of the Empire.” Each experience is immersive and tackled as a team, which makes it sound like an escape room on steroids. There are some restrictions – guests must be 48 inches and the recommended minimum age is 10, so take the younger kids on a gondola ride or indulge in the French pastries at Thomas Keller’s Bouchon. Ironically, The Void is based in Lindon, Utah, but their Beehive State location is not open to the public, so Vegas is the closest opportunity to experience this homegrown technical achievement in entertainment. 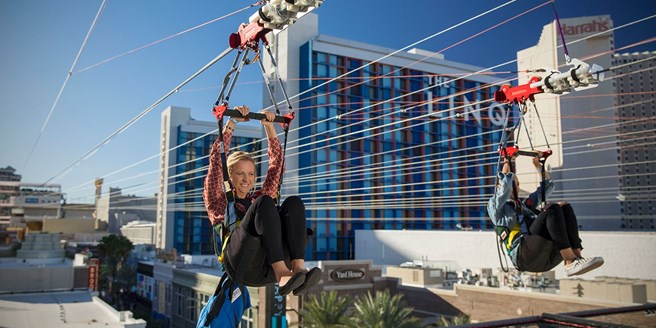 Thrill-seekers will enjoy the new FLY LINQ zipline, which allows up to 10 riders to zip along over the Vegas strip side-by-side. This $20-million attraction launches riders from a 114-foot tower (approx. 14 stories) along a 1,121 foot-line to a 54-foot landing tower. The trip lasts 35-45 seconds and sends guests rocketing at speeds averaging 35 mph. To fly this high, you must weigh at least 60 pounds, with seated daytime passengers costing $25 (you pay $35 if you want to take the trip lying down), and nighttime adventurers will pay $30-$40. For more info, click here.

Though Cirque du Soleil’s traveling productions visit Utah regularly, their sets really don’t hold a candle to those enjoyed at the company’s Vegas installations. With six shows presently in residence, including the more family-friendly “KÀ,” “The Beatles LOVE,” “O” and “Mystère,” seeing Cirque du Soleil in Vegas is an unmatched theatrical experience. The bonus: The shows have been running for so many years, that ticket specials are often available. Check them out by clicking here.

If the Strip is too frenetic for you and your kids, consider staying at one of the resorts on the outskirts of town in Henderson. A few local faves include Green Valley Ranch and the casino-free Westin Lake Las Vegas.

While evidence of Utah’s frontier heritage is abundant, our neighbors in Idaho also boast many boomtowns turned ghost towns within a day’s drive.

Most boomtowns were built solely around mining enterprises, and were abandoned as quickly as they were settled. Throughout Idaho, 100 ghost towns harken back to the Gem State’s mining heritage, and quite a few are worth the trek to help little history buffs take a step back in time. 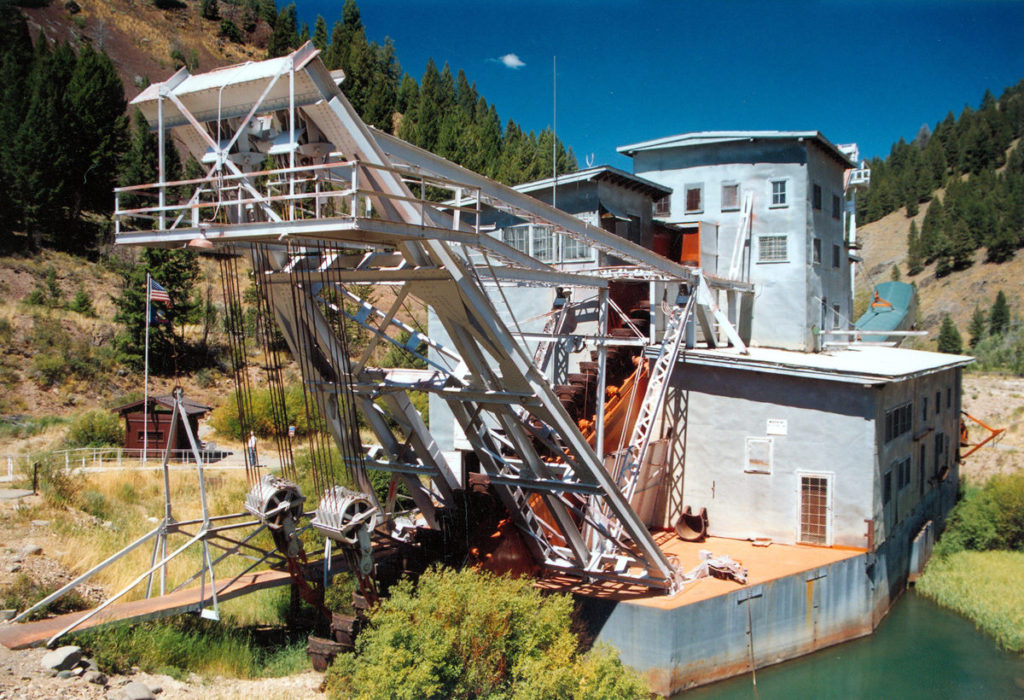 The following suggested route hits the highlights, while also allowing for overnights in areas where lodging is plentiful and opportunities for recreation to enhance your historic trek are abundant.

First on the stop is Chesterfield Historic Town, located between Lava Hot Springs & Soda Springs, a three-hour drive from Park City. The Chesterfield Foundation is working to preserve many of the sites, but 11 buildings currently exist to help tell the town’s pioneer heritage. From Chesterfield, either drive to Pocatello to spend the night, or go on to Stanley, swinging through Bayhorse and Mackay on the way.

After a night in Stanley, check out nearby Custer Ghost Town. Founded in the 1870s, Custer’s historic site designation in 1981 preserved the town’s buildings and artifacts, many of which have been restored and can be visited via docent-led tours. Nearby, a few buildings remain in the town of Bonanza, but most burned in a fire in 1889, sending the majority of residents to nearby Custer.

Head north from Custer for an overnight in Missoula, Mont. While in Missoula, check out Unseen Missoula’s “Basements & Back Alleys” tour, which gives visitors a glimpse into secret spaces few tourists get to see. To continue the ghost town tour, drive just 30 miles from Missoula to find Garnet, which was named after the semi-precious stone found there, and boasts more than 30 preserved historic buildings. Also nearby is Coloma, where mining shafts and railroad artifacts can still be found.

Leaving Missoula, head northeast toward Coeur d’Alene and the town of Wallace, once known as the “Silver Capital of the World.” The Wallace Area features the Sierra Silver Mine Tour, which takes you into the main drift of the actual silver mine. Though the area has produced more than a billion ounces of silver in its 100-year history, it’s now a draw for outdoor recreationists, especially bicyclists, thanks to the Trail of the Coeur d’Alenes – a paved bike path under I-90 – that passes above Wallace as it follows the South Fork of the Coeur d’Alene River through the Silver Valley.

Just seven miles north of Wallace is Burke Ghost Town, built in a canyon so narrow, the train went right through the hotel lobby. Head from Burke up to Coeur d’Alene, where a night at The Coeur d’Alene Resort should help kick off the dust in luxury.

After a good night’s rest, drive south to Boise, stopping by Placerville, where the original Boise Basin Mercantile building from the 1860s has been converted into one of the town’s museums.

Once in Boise, take a few days to check out the rich history of Idaho’s capitol city, including the Old Idaho Penitentiary, which is included in one of the Boise Township Tours that takes visitors to a variety of historic spots via trolley.

The trip from Boise back to Park City can be a haul, so plan to stop by Shoshone Falls – a 212-foot waterfall that’s actually taller than Niagara Falls. There, you’ll find playgrounds, picnic areas and hiking trails. It might be too brisk for a swim, but the beauty of the falls makes for a nice break on the way home.

Bonus: While driving between ghost towns, play a little Idaho Bingo with these nifty cards designed by the Idaho Department of Commerce – Tourism Development.

Whether hitting the road, or opting for a staycation, the destinations above will be waiting for you next time you’re bitten by the last-minute wanderlust bug!

Want to learn more about planting roots in amid the natural beauty and historic neighborhoods of Park City and surrounding towns? You can Choose Park City by calling Christine Grenney at 435-640-4238, or visiting her website by clicking here.