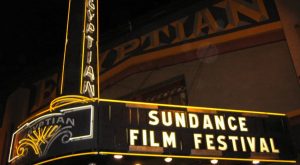 One of the fastest rising names in Dance Music, Party Favor’s edgy style helped pioneer the festival trap genre and is currently making groundbreaking remises for names like Dillon Francis, Diplo, Flosstradamus and Major Lazer. Ages 21 and over.
Tickets are $18-$40
435-649-9123 | www.parkcitylive.net

Part of the “Books 2 Movies Series,” in partnership with the Park City Library and Summit County Libraries, this free screening of the 1994 film depicts Louisa May Alcott’s 1868 novel about love, family and the female spirit.
435-615-8291 | www.parkcityfilmseries.com/

Three passionate experts on Criminal Justice Reform will participate in this event, including CNN contributor, attorney and former White House advisor Van Jones; actor and death penalty abolitionists Mike Farrell; and the first man released from Death Row based on DNA evidence not presented at a trial, Kirk Bloodsworth.
Tickets start at $29.
435-655-3114 | www.EcclesCenter.org

With the lead actors nominated for Golden Globe Awards, this film celebrates the real live courage and commitment of Richard and Mildred Loving, and interracial couple who married then spent the next nine years fighting for the right to live in their hometown as a family. Their case, Loving v. Virginia, was a landmark civil rights case that was successfully heard by the Supreme Court in 1967.
Show times are Friday and Saturday at 8 p.m., and Sunday at 6 p.m.
Tickets are $8 for general audiences, $7 for students and seniors. A $65 10-punch card is also available.
435-615-8291 | www.parkcityfilmseries.com/ (Photo credit: Park City Film Series)

These FREE screenings for Summit County residents (with proof of ID) will be held on Tuesday, January 24, at the Redstone Cinemas (7 p.m.) or Library Center Theatre (9 p.m.), and on Monday, January 30 at Eccles Center (6 & 9 p.m.). To receive tickets, you must be at least 18 years old, able to present a legal Utah ID, and can only claim two tickets per person. Visit https://www.sundance.org/festivals/utah-community for more information.
888-285-7790 | www.Sundance.org

Hilda lives high above the city, happily at home with tens of thousands of rare and luscious plants in her palace of a greenhouse. But down below, a new, genetically modified super-grain threatens to disrupt the delicate natural harmony. Hilda must help the Earth save itself from a very colorful biological mayhem.
435-615-8291 | www.parkcityfilmseries.com/ (Photo credit: Park City Film Series)

See or be seen during the 10-day festival that put Park City on the Independent Cinema map. No tickets or passes? Take advantage of two locals-only events – Townie Tuesday on January 24 or Best of Fest on January 30 (ticket pickup is Saturday, January 14 at the box office in Old Town starting at 8 a.m.). The general public (a.k.a. – those without Festival credentials) can pop into the headquarters at Park City Marriott, Base Camp at 475 Swede Alley, Co-op on Main Street, or the Filmmaker Lodge in the Elks Building at 550 Main Street (2nd Floor).
888-285-7790 | www.Sundance.org

Tickets for these screenings, held as the Festival’s way of saying “thank you” to Parkites for playing host for 10 days, are distributed at the Main Box Office (136 Heber Avenue) on Saturday, January 14 at 8 a.m. (see listing above). Visit https://www.sundance.org/festivals/utah-community for more information.
888-285-7790 | www.Sundance.org

Park City favorite, Michael Franti, is a musician, filmmaker and humanitarian who is recognized as a pioneering force in the music industry. Long known for his globally conscious lyrics, powerful performances, and dynamic live shows, Franti has continually been at the forefront of lyrical activism, using his music as a positive force for change. Ages 21 and over.
Tickets are $75 & $125
435-649-9123 | www.parkcitylive.net\

Nab your tickets for these Festival award winners on Saturday, January 14 beginning at 8 a.m. at the Festival Box Office (136 Heber Avenue), or locals without tickets can use their eWaitlist account to request a waitlist number two hours before each screening.
888-285-7790 | www.Sundance.org