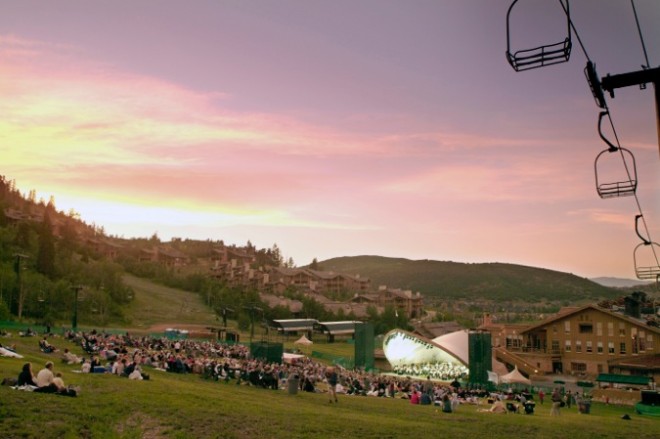 One of the many benefits of living in Park City is the opportunity to spend cool summer nights listening to every conceivable genre of music via outdoor concerts in Park City–some free, some bargains and some pricey, though usually still worth the investment.

The majority of large concerts in Park City take place at the base of Deer Valley Resort, where many weeks see concerts presented by no fewer than three organizations, including the Utah Symphony, which calls the resort “home” each summer. Locals and visitors, alike, flock to the Symphony’s Deer Valley Music Festival, which melds classical with Broadway and pop throughout the serie. The 2014 highlights including country crooners Kenny Rogers and Mary Chapin Carpenter, tribute shows Music of U2 and Super Diamond: The Neil Diamond Tribute, Mozart’s Symphony No. 36 and Ben Folds Orchestral Experience. For a complete rundown, and for ticket pricing (which varies per show), visit the Utah Symphony Website.

Park City Institute (formerly the Park City Performing Arts Foundation) presents its 11th Big Stars Bright Nights Series at Deer Valley Resort, featuring a heavy dose of country, including Dierks Bentley, Kix Brooks (of Brooks and Dunn fame), and Vince Gill and the Time Jumpers. They’re also hosting a review of stars from the TV show “Nashville,” Five for Fighting, and a return of both the Punch Brothers and The Bacon Brothers (comprised of movie star Kevin Bacon and his brother, Michael). Tickets begin at $40 for the lawn and $55 for reserved, with some reserved seats as high as $85.

If you’re unfamiliar with seating at Deer Valley, headliner concerts in Park City are presented by the Park City Institute or Utah Symphony. Purchasing reserved seating is often worth the money. With lawn seating, bring your own low-rider chair (nothing high enough to roll a basketball under), or you can sit on just a blanket. In the reserved area, chairs are already provided, which is quite a treat during the more popular shows. Picnics are welcomed in either section (yes, even in Utah, this includes alcoholic beverages of your choosing, though plastic stemware is encouraged) and it’s always a good idea to bring a blanket regardless of seating on the lawn or in reserved, as temperatures can dip into the 50s, even after an 85-degree day.

Deer Valley Resort is also home to Mountain Town Music’s much-loved free Grand Valley Bank Community Concert Series. The series outgrew its original City Park location many years ago, moving to Deer Valley where parking is ample and picnics are encouraged, with open seating on the grass and a congenial vibe among the attendees, the majority of which are usually locals. The concerts feature local and regional bands, typically beginning in mid-June, and this year’s lineup is presently being voted upon by the public. If you’re interested in participating in the selection process, click here to vote on these concerts in Park City.

Mountain Town Music also programs free concerts in every nook and cranny of Summit County, from amphitheatre shows on Saturdays at Canyons Resort, to Thursday nights at Newpark (Kimball Junction by the Swaner Nature Preserve) and Coalville on Main (in the county seat of Coalville), Fridays at Peoa’s Woodenshoe Park, Saturdays and Sunday afternoons (along with some Fridays) at Main Street’s quaint Miner’s Park, and Sundays at the ever-growing Park Silly Sunday Market. They also schedule musicians for the Park City Kimball Arts Festival in August and Sundays at Billy Blanco’s restaurant in Quarry Village (Pinebrook/Jeremy Ranch), though this series is not listed on their site at this time. See the Mountain Town Music website for a complete listing of their 200+ concerts in Park City each year.

Silver Star Café, owned and operated by long-time locals Jeff and Lisa Cilva Ward, offers 77 Park City Limits dinner shows Thursday, Friday and Saturday nights. The music plays on their outdoor patio for guests, featuring 25 different musical artists and groups from local to national touring artists. They will no longer be holding their free Plaza Palooza shows every Thursday night, but the café – soon to be featured on a May 9th episode of the Food Network’s “Diners, Drive-Ins and Dives” – is worth the cost of dinner to enjoy great music and nationally recognized menu offerings.

If you’re looking to venture outside of Park City, Red Butte Garden offers a spectacular slate of performers starting with Emmylou Harris on June 3, continuing with acts such as the Avett Brothers, Sarah McLachlan, Sheryl Crow, Natalie Cole, Lyle Lovett & his Large Band, Santana, Red Butte regular Chris Isaak, the legendary (and oh-so-worth seeing) Earth, Wind & Fire, and concluding with Conor Oberst on Sept. 14. Tickets range from $35 to $100 (for Santana, but can you blame them), with Garden members saving $5 per ticket. Members also get advance purchase starting online on April 28 at 7 p.m., then online, over the phone and in-person starting at 9 a.m. on April 29. Tickets go on sale to the general public at 9 a.m. on May 5, though many Red Butte shows sell out, so purchasing a Red Butte Garden membership is often times worth the donation. Check out the Red Butte Garden website for more details. Much like shows at Deer Valley Resort, the Red Butte Garden picnic policy is fairly liberal, with alcoholic beverages permitted, though there is food available for purchase at both venues.

The one place you won’t be bringing in your own picnic is at USANA Amphitheatre, located west of Salt Lake, but featuring some of this summer’s hottest tours, including Keith Urban, Goo Goo Dolls with Daughtry, OneRepublic with The Script and Blake Shelton, in addition to nostalgia bands, Boston, STYX with Foreigner and Journey with Steve Miller Band. The concert also includes Michael Franti & Spearhead’s first-ever music & yoga tour, Soulshine, for all those Franti-atics. Tickets include general admission and reserved, with some as low as $20, but must be purchased through SmithsTix, so expect extra fees on top of ticket costs.