For years, deciding which Park City Season Pass to purchase came down to personality and preference. It seemed that snowboarders often went to Canyons Resort. Families seemed to choose Park City Mountain Resort (PCMR). And those looking to avoid snowboarders and/or those who could afford it ensconced themselves in the cushy surrounds and famous corduroy groomers of Deer Valley Resort. 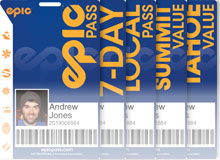 Then along came Vail Resorts. After assuming operations of Canyons Resort this summer, the shiny new “Epic Pass” has changed the game for locals and visitors alike. Not only has it brought the overall season pass cost down to one of the lowest in the region, it’s prompted seemingly unflappable Deer Valley and PCMR to pony up additional benefits in order to compete with the potential loss of untold numbers of patrons unable to turn down such a seemingly great deal.

The base level Epic Pass is just $549, though that’s $20 more than when it was first rolled out this summer. It includes typical ski area holiday blackout dates around Thanksgiving, Christmas/New Year’s and President’s Day. But it can also be used at Heavenly, Northstar, Kirkwood, Breckenridge, Keystone and Arapahoe Basin, with 10 days thrown in at Vail and Beaver Creek.

Skiers and boarders can do away with the pesky restrictions by purchasing a $709 Epic Pass, which also allows for five free days at Verbier, Switzerland; Arlberg, Austria; and now Les 3 Vallées, France. If you happen to be headed to Europe this year, that’s fantastic. If you’re a local worker bee just scraping together enough cash to pay for passes for the entire family, not so much.

Of note, this year’s unlimited pass, in addition to the reciprocal skiing privileges, is an impressive $140 less than last year’s unlimited Canyons pass. Last year’s pass started at $849 for early birds and increased to a whopping $1,149 after September 15 ($440 more than this year’s unrestricted pass). However, much ballyhoo has been made around town that, under Vail’s management, many buddy pass opportunities and other discounts, such as those for the military, have been eliminated. But with a $549 base price for everyone, regardless of special status, it still stands as the best deal in town.

In response to the local Epic Pass roll-out, Deer Valley and PCMR slid into slight crisis mode by partnering with Alta and Snowbird to offer its pass holders three free one-day lift tickets each to Alta, Deer Valley and Snowbird. That’s an additional nine days of skiing where none existed before. Though the notion of wooly Alta purists skiing the swanky runs at Deer Valley is initially amusing, it’s also worth a second look. The passes are good seven days a week, except during Christmas/New Year’s and President’s Weekend. And the combined value of the nine passes is considerable, especially if one exerts the effort to use them all. PCMR’s base price for an adult pass is $880; for Deer Valley, it’s $1,910 before October 31, then $2,220 thereafter, though if you add the value of the additional nine tickets, it becomes an entirely more positive value proposition than in previous years.

By comparison, an unlimited Snowbird pass to use both the chairs and tram is $1,199, though you can add in Alta for a total of just $1,499. An Alta pass on its own is also $1,199, while nearby Solitude runs $799 – add in Brighton and it’s $999. Head up to Snowbasin, and expect to pay $719 for unlimited access. Snowbasin appears to be Canyons’ biggest competitor with a similarly restricted pass at just $519. Snowbird is also offering Vail Resorts reciprocity via the Powder Alliance. Though unlike Vail’s impressive roster of resorts, the Powder Alliance resorts are kind of “meh.” Finally, nearby (as in, within driving distance), Jackson Hole offers its “Grand Pass” with no restrictions for $1,695, putting it on par with Deer Valley.

The million dollar question now is: if Canyons Resort is successful at drawing skiers and boarders away from other resorts with its attractively priced pass, how is that going to affect skier traffic? The already congested bottleneck areas around Red Pine Lodge are a young child’s worst nightmare. More than one friend has shared their horror stories of a preschooler being plowed down by a skier or rider. If the resort can effectively move skiers and boarders to the less trafficked areas of the mountain, they could have a real “win” on their hands. Otherwise, this year’s potential bump in pass sales could be a one-hit wonder.