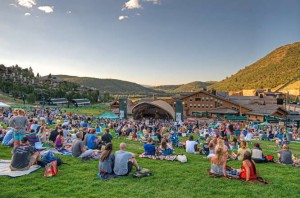 Summertime in Park City has become synonymous with outdoor music, and this year is no exception. From classical to classic rock, there’s a chance to shake your groove thing nearly every day of the week.

What started out as a modest Wednesday night concert series in City Park has exploded to include concerts at every conceivable venue throughout town and across the Snyderville Basin.

Diehard music fans can even head down to Salt Lake for options that expand the late June through August summertime music in Park City schedule to include the shoulder season months of May and September.

Visitors are often surprised at this annual opportunity to picnic it up, and with a nice adult beverage, no less. That’s because most of the venues are private, and imbibing is allowed as a result.

The original Wednesday night free concerts are still one of the most beloved summertime traditions among locals and visitors. The Grand Valley Bank Community Concert Series at Deer Valley was initially launched by Park City Performing Arts Foundation in the small pavilion by Miner’s Hospital in City Park. A few years in, the crowds grew too large for the grassy knoll, necessitating a move to Deer Valley’s Snow Park Lodge.

Many seasons later, PCPAF (now the Park City Institute) handed the reigns over to the prodigious Mountain Town Music, which has expanded the roster of bands to include both local favorites and national touring acts. For this year’s series, local bands include Son of Ian, The Crescent Super Band, The Chickens, and Park City’s legendary Motherlode Canyon Band. All concerts start at 6 p.m., and ample parking is available in Deer Valley Resort’s adjacent lots.

This year’s schedule is as follows:

Mountain Town Music’s other summertime shows are held at Miner’s Park on Main Street every weekend, Thursday nights at the Newpark Amphitheatre at Kimball Junction, in Peoa at Woodenshoe Park on Fridays, Saturday nights at Canyons Resort, Sundays during the day at the Park Silly Sunday Market, and Sunday nights outside of Billy Blanco’s restaurant in Quarry Village. Check out their website for updates.

The Deer Valley Music Festival kicks off on July 4th, featuring Patriotic Pops with Bravo Broadway, and ends on August 14th with the inimitable Diana Krall. All headliners share the stage with USUO musicians, creating an under-the-stars mountainside experience available in few other venues. Some of the smaller shows, however, take place at the beautiful St. Mary’s Church on S.R. 224 (near the McPolin Barn). Tickets are available at the Deer Valley Music Festival website, and the full lineup is as follows:

This year’s St. Regis Big Stars, Bright Nights concert series has an earlier-than-usual start on June 30 with the triple header of Toad the Wet Sprocket, Smash Mouth and Tonic, and concludes Labor Day weekend on September 6 with hitmaker Aloe Blacc. Tickets are available for purchase online here, or in person at the Eccles Center Box Office. The full lineup includes:

Tickets for the Red Butte Outdoor Concert Series went on sale to members only on April 27 and, by all accounts, many of the shows sold out on the first day. In years past, however, tickets for shows that were “sold out” in the spring mysteriously became available as the concert date neared. Often, the reason given is the artist released their holds, but either way, hold off from purchasing on ticket resale sites to see if tickets are released by the venue itself. Be sure to sign up for Red Butte’s newsletter and “like” them on Facebook so you don’t miss out. Tickets go on sale to the general public at 9 a.m. on May 4, and can be purchased at www.redbuttegarden.ticketfly.com.

This year’s series is as follows:

September 15     An Evening with Mark Knopfler

September 16     An Evening with Ben Harper & The Innocent Criminals

Finally, the Thursday night Twilight Concert Series at Pioneer Park in Salt Lake City started out at the much smaller and intimate Gallivan Center Plaza, but as the crowds grew, the organizers moved it to its current location, eventually charging admission to keep out the riffraff. The park gets a scrubbing right before each show, with Salt Lake City’s finest moving the homeless out and securing the venue with a huge chain link fence. It’s still one of the best values around, with tickets just $5 in advance and $10 at the gate, and there is ample parking at the nearby Gateway Mall’s two indoor lots. Visit 24Tix.com for ticket information, and check out this year’s lineup (so far) below:

Whether it’s hearing a yet-to-be-discovered local band at Newpark, or a true legend with USUO, the fabulous summertime music in Park City is yet another reason to call Christine when you’ve decided it’s time to Choose Park City.