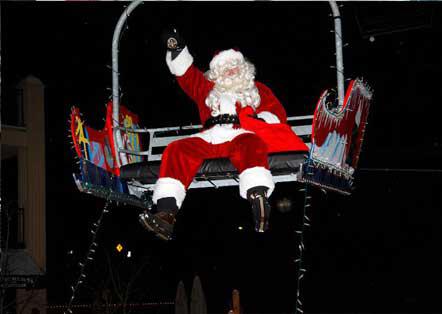 New York City might have ice skating and the big tree at Rockefeller Center, but Park City and the surrounding communities create a unique Winter Wonderland.

Chalk it up to the kid-friendly attitude of locals, or the unparalleled aptitude for creating spectacular events to attract visitors from around the world. During the holiday season, Park City easily lives up to its recent ranking as No. 1 on Travel + Leisure’s list of America’s Best Ski Towns.

Though most events take place in December, there is a local tradition that officially kicks off the season on Nov. 28, when the Electric Parade hits Main Street in Historic Old Town. Instead of driving from neighborhood to neighborhood to check out holiday lights, settle in for this Park City tradition, where an eclectic array of creatively-illuminated vehicles hit the street, with local judges awarding prizes in one of four categories. The festivities begin as Santa and his top Elf stroll Main Street to greet revelers from 4 – 6 p.m., followed by Holiday Carolers from 5 – 7 p.m., and the official lighting of the Town Christmas Tree in City Park at 5:30 p.m. At 6 p.m., it’s time to flip the switch on the Main Street lights as the parade begins in City Park before heading up Park Avenue, and finally turning onto Main Street. There’s no cost to enter the parade, and everyone’s encouraged to participate.

On Saturday, December 5th, Main Street becomes an adults-only version of the North Pole during the annual Park City Santa Pub Crawl. Creative costuming is encouraged, with participants starting out at Butcher’s at 6:30 p.m., then heading to the Downstairs at 8 p.m., the No Name at 9:30 p.m., and on to O.P. Rockwell’s at 11 p.m. The event features a Toy Drive at the Downstairs this year, so bring an unwrapped toy along with a healthy dose of Holiday Cheer. More information is available on the event’s Facebook page.

Hanukkah begins on Dec. 6, and Park City’s Temple Har Shalom has historically held a celebration at their beautiful location on S.R. 224, check out their calendar for more details.

The annual holiday celebration at Park City Ice Arena will be held on Dec. 9, with a visit from Santa, skating, ornaments, cookies and hot chocolate from 5 – 7 p.m.

Also on Dec. 24th, an event 53 years in the making takes place at Park City Resort with the annual Torch Light Parade. The celebration starts at 5:30 p.m. at Park City Base Area (formerly Park City Mountain Resort) with holiday music, cookies and cocoa, followed by the on-hill parade.

On Dec. 30, Deer Valley Resort holds its torchlight parade on Big Stick Run (behind Snow Park Lodge), beginning at dusk, or around 6 p.m. Complimentary hot cider and cookies will be served on the Snow Park Plaza from 5:45 – 6 p.m.

Throughout December, the Kimball Art Center is holding a series of parent/child holiday classes in their new location at 1401 Kearns Boulevard. Make the trip to Grandma’s house even more special by bringing handmade gifts such as cookie plates, snow globes, ornaments and gingerbread houses.

Joyeux Noël extends beyond Park City limits, as evidenced by the abundant offerings available in nearby towns. Just 20 minutes from Old Town, the historic Heber Valley Railroad runs their North Pole Express from Nov. 27 – Dec. 24. An homage to the classic children’s novel, “The Polar Express,” the 90-minute trip to the North Pole includes Mrs. Claus’ famous chocolate chip cookies, cocoa, songs and of course Santa, who presents each child with a special gift. Available dates, departure times and tickets can be found by clicking here, where you can choose from First Class or Coach for this singular family activity the kids remember for years.

Also located in the nearby Heber Valley are the Midway Ice Castles, featured in the YouTube version of “Let It Go” by Salt Lake City-based One Voice Children’s Choir (seen by a mere 73-million viewers). This frozen fantasyland opens in late December, welcoming guests Monday – Saturday with spectacular lights and shapes.

If your kids are a little older, start a holiday tradition with a visit to Ballet West’s 60th Anniversary Production of ‘The Nutcracker,” which happens to be the longest running full production of the holiday classic in America. (Younger kids might enjoy Park City Dance’s abbreviated, yet fully-costumed, version on Saturday, Dec. 19, at The Eccles Center.) Staged at the 102-year-old Capitol Theatre in Salt Lake City, it’s worth the 30-minute drive from Park City to experience the land of the of the Sugar Plum Fairy in person. Kids and adults dress to impress, and nearby restaurants run the gamut from super kid-friendly to super chic. If you’re going to one of the matinee performances, be sure to stick around for the after-show Sugar Plum Party held right on the stage with cast members, cookies, punch and an ornament, all for just $10 per ticket. For dates, times and tickets, call 801-869-6900 or visit arttix.org.

While you’re downtown, head over to Temple Square to check out the legendary Christmas Lights and Nativity scenes, which light up the day after Thanksgiving on Friday, Nov. 27. The impressive display attracts visitors from all over the world, illuminating daily at 5:30 p.m. You can plan your visit to coincide with one of the Mormon Tabernacle Choir’s concerts, a not-to-be-missed experience for folks of all faiths.

The holidays in Park City are just one more reason so many people Choose Park City for their primary and second homes. Call me today to help you choose yours!